Jalandhar District court Recruitment 2016 For 27 Various Posts. Office of the District & Sessions Judge, Jalandhar has announced a notification for the recruitment of Orderly/ Peon/ Waterman vacancies. Eligible candidates may apply in prescribed application format on or before 31-05-2016 at 05:00 PM. Other details like age limit, educational qualification, selection process & how to apply are given below. 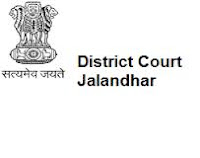 Seeds of present courts in Jalandhar were sown by Baron Lawrence. After the First Sikh War (1845-46) Baron Lawrence was made Commissioner of the newly annexed district of Jullundur where he subdued hill cheifs, established courts and police posts and curbed female infacticide and Sati. On the Punjab Board of Administration he abolished internal duties, introduced a uniform currency and encouraged road and canal construction. The Board of Administration set up in 1849 was abolised in 1853. The Punjab was put under Chief Commissioner and under him was appointed Judicial Commissioner. Robert Montgomery was the first Judicial Commissioner. Courts were set up in Punjab soon after annexation. The Judicial Department was set up in the year 1853 to provide the courts with the written law which they could administer.


Name of the Posts:

Candidate age should be 18 to 37 years for General category as on 01-05-2016. Age relaxation for reserved categories as per Punjab Govt. instructions.

Candidates should possess Middle Pass and have the knowledge of Punjabi.

Candidates will be selected based on interview.


How to Apply For Jalandhar District court Recruitment 2016:

Eligible candidates may send their application in prescribed format along with attested copies of relevant testimonials, two recent passport size photographs to Office of the District & Sessions Judge, Jalandhar on or before 31-05-2016 at 05:00 PM.