KLGSDP Recruitment 2016 For 11 District Coordinator Posts. Kerala Local Government Service Delivery Project (KLGSDP) notification 2016-2017 for the recruitment of District Coordinator vacancies on contract basis. Kerala Jobs. Eligible candidates may apply in the prescribed application format on or before 06-06-2016 by 05.00 PM. 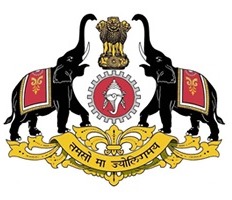 Kerala, is a state in the southernmost part of India. Kerala, with appreciative development indicators comparable to developed countries, has been experimenting with decentralization and participatory local democracy, ultimately aimed at realization of the constitutional goal of establishing genuine "institutions of local self government" since the enactment of Kerala Panchayat Raj Act & The Kerala Municipality Act in the year 1994. The acts laid the provision of a three tier system of Panchayat for the first time in the village, block and district level in the rural areas and one tier system of urban local government such as Municipality in the less urbanized areas or Municipal Corporation in the more urbanized areas. Local governments were vested with the powers and responsibilities of economic development and social justice in their respective areas. Panchayats and the Municipalities altogether constitute the Local Government System of Kerala state in the Indian federal system

Candidates will be selected based on interview.

Eligible candidates may send a detailed resume to The Project Director, Thaddesa Mithram, Fourth Floor, Trans Towers, Vazhuthacaud, Thiruvananthapuram 695 014, Kerala or mail to www.klgsdp.org on or before 06-06-2016 by 05.00 PM.